The third instalment of Robert Galbraith's crime novel series, Career of Evil (2015), sees private detective Cormoran Strike and his trusty sidekick Robin Ellacott hit the streets on the trail of a serial killer.

Hot on the heels of their last adventure, Strike's detective agency is doing well with many clients keen to use the services of the man who solved the Lula Landry and Owen Quine cases. 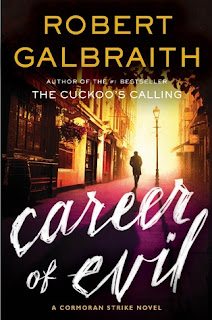 This novel begins with Robin receiving a box by courier which contains a body part - so they have to find out who the limb belongs to as well as who the sender is. Strike has a handful of suspects in mind - all men from his past with a violent streak and a reason for targeting Strike.

As Strike and Robin try to rule out each of these potential killers, the killer is also watching their every move. To complicate things further, Robin is in the midst of planning her wedding and Strike is trying to decide if he really wants to date the glamorous but dull Elin.

There is a lot of suspense in this page-turner, with twists and turns along the way. But what I really loved about this book was that we learned more about the backstory of both Strike and Ellacott. Things that have been hinted at in the past are fleshed out in more detail, about Strike's groupie mother, his time in the military and his injury.

More importantly, we learn about Robin - her ambitions and her history - and she becomes a more complete character. She evolves in this novel to become Strike's partner in this business - on stake outs, interviewing potential witnesses and taking on a much more active role. I can't wait to see what she gets up to next.

I know JK Rowling has been extremely busy with the Harry Potter and the Cursed Child play, the Fantastic Beasts and Where to Find Them movie, and more. But I do hope she slips into her Galbraith skin and pens the next novel soon.

In the meantime, the BBC is producing a series of Cormoran Strike mysteries for broadcast in late 2017. Should be great!

My review of Galbraith's The Cuckoo's Calling (2013) and The Silkworm (2014) are available on this blog.