So this week there has been a LOT of hoo-ha about the alleged outing of Elena Ferrante. For those living in caves or just defrosted from cryogenics, Elena Ferrante is the nom-de-plume of an Italian writer of the Neapolitan novels which have taken the world by storm. 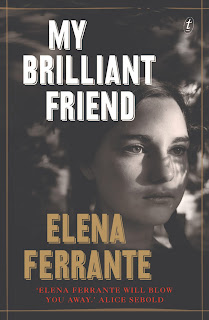 Ferrante Fever hit fever pitch this week when Italian journalist Claudio Gatti claimed to have found the real author, a translator who has come into some money via an Italian publisher. Gatti's desire to reveal Ferrante's identity seems to come from a place of vindictiveness, not idle curiousity, and outing her has  caused outrage and bemusement.

There are a lot of interesting articles about this around the interweb this week.

I liked that we didn't know who Ferrante is. She has the right to privacy and it is not in the public interest to know who she really is. She has given us her brilliant work, and that should be enough. We know her as she wants us to know her. As far as I am concerned, Ferrante is still a mystery.

So many of my favourite authors wrote under a pen-name - George Eliot; George Sand, Karen Blixen, Robert Galbraith - all of them women seeking to find a safe creative outlet. Leave them alone and let them write!


In other news.... Hillary Clinton rides high after her debate triumph, and Donald Trump continues to win the hearts and minds of women everywhere with his love of the fairer sex. He loves women so much he cannot help kissing beautiful women and grabbing at them. If we needed more evidence of his absolute unfitness to be president, we got it in the form of a 'sex tape' of sorts when a recording of his misogyny was released to the press. Some of the more enlightening commentary comes from:

I reckon Trump's biggest problem is his sense of entitlement. As a wealthy, privileged white guy, he is used to getting his own way in business and in life. He has demeaning views that objectify and alienate women. He is not fit to be President of anything.

Huw Parkinson prepared this mashup for ABC's Insiders, which is genius:

Finally, one of the best things I have seen on the internet this week if the Pantsuit Flashmob for Hillary. Enjoy!