On 7 February 2009 a series of bushfires blazed across Victoria killing 180 people and destroying over 2000 homes and a million acres of land.  An extreme heatwave of mid-40c temperatures and dry high winds created the right conditions for a rapid and extensive blaze. While some of the 400 fires were caused by accident - such as lightening or felled power lines - others were caused by arson. A Royal Commission investigated the fires, the response by authorities and the controversial 'stay or go' evacuation policy. 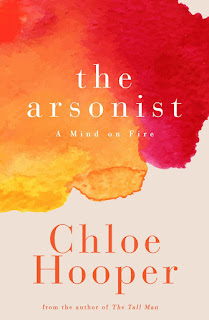 Australian author Chloe Hooper's latest book is The Arsonist (2018), subtitled 'a mind on fire', attempts to discover why someone would deliberately light such a debilitating fire. Hooper follows the detectives, the lawyers and the trial of the accused arsonist.

The Churchill fire in Central Gippsland began in a pine forest with two seperate ignition points 100 metres or so apart. Within days of the fire investigators knew it was arson and quickly honed in on suspects. By 12 February a local man, Brendan Sokaluk, was arrested and charged with arson causing death, intentionally lighting a bushfire and various other offences.

Sokaluk claims he was disposing of a cigarette and accidentally started the blaze - a scenario which is disputed and disproven. Instead, it is claimed that he deliberately lit the blazes and then went home and sat on his roof to watch the inferno which killed eleven people.

Sokaluk is not a cunning criminal mastermind - rather he had a terribly hard life growing up with undiagnosed autism. He was consistently bullied and found it hard to make and maintain friendships. His personality quirks and child-like behaviour caused problems at his maintenance job. His only friend is his beloved pet dog Brockie. Sokaluk's Legal Aid team find it hard to get him to understand what was happening to him and are continually wondering if he knows the magnitude of what he has done.

Hooper is a gifted writer, describing the fire as an incredible, devastating beast.  With the same investigative skills she employed in The Tall Man (2008), Hooper conducts extensive research to understand bushfires, and interviews people impacted by the fire - police, victims, emergency services and more. Reminiscent of Helen Garner's investigative work (like This House of Grief), Hooper is a keen observer and attempts to understand the 'why' of what has transpired by sifting through the ashes. While its writing, pacing and gripping story made The Arsonist and easy read, the subject matter is not easy at all. The stories of the survivors and those who were lost are devastating. Hooper tells these heartbreaking tales with dignity.
Posted by Ina Guddle at 11:40
Newer Post Older Post Home