For months I have had the release date of Jane Harper's latest novel, The Lost Man (2018), in my calendar and I actually schedule time in my diary to acquire and read it. My excitement over this new release was based on my admiration for Harper's two previous novels, The Dry (2016) and Force of Nature (2017).  I inhaled her latest page-turner with the same eagerness and delight. 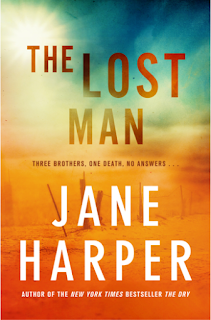 Set in outback Queensland, the three Bright brothers - Nathan, Cameron and Bub - live on isolated, neighbouring properties. Somewhat estranged, Nathan and Bub come together when their brother Cameron is found dead at the landmark Stockman's Grave. What was Cameron doing there, in the middle of the desert, in 40-degree heat, almost ten kilometres away from his vehicle? The car had not broken down, was fully loaded with water and other provisions. With all of his survival skills, why would Cameron venture out on his own?

In trying to determine what happened to Cameron, we are introduced to his wife and daughters, his mother, backpackers and workers on the land. Each one has secrets and as the mystery unravels we learn that there is much more going on here than first appeared. It is a place of hard living in an unforgiving and brutal land.

Much of the story is told through the eldest brother Nathan. Since childhood, he and Cameron never quite got along and their estrangement only grew. Nathan spends most of has days fixing fences and his only interactions are every six weeks or so when his online delivery of provisions arrive. His teenage son Xander has come home from Brisbane for the Christmas holidays and Nathan finds it hard to connect when they have such different lives.

While reading this I often thought about Rick Morton's memoir One Hundred Years of Dirt  about growing up on a large station in outback Queensland. He described a similar childhood of School of the Air, social isolation and a complex, brutal upbringing.  Harper channelled this completely in her novel. She has the ability to lure readers into the environment and make you feel as though you are there among the heat and dust. Her evocative descriptions of the harsh landscape and the weather allow you to immerse yourself in the story. She has also created vivid characters - particularly Nathan, Cameron's daughters, and Xander - and doles out clues to the mystery in such a way that keeps readers guessing.

Harper's previous novels featured Detective Aaron Falk, a character I have grown to love and hope to hear more from. I knew that he would not appear in this book and I was admittedly a bit apprehensive. While I greatly enjoyed The Lost Man, Falk was definitely missed and I long for his return! Will have to wait for the her next novel, which judging by her annual release pattern, is only a year away.
Posted by Ina Guddle at 10:54
Newer Post Older Post Home