I didn't know much about Rick Morton when I picked up his memoir One Hundred Years of Dirt (2018). All I knew was that he was a social affairs reporter with The Australian and I had seen him a few times on ABC's The Drum and liked what he had to say. So I came to his memoir with few expectations but a genuine curiosity. 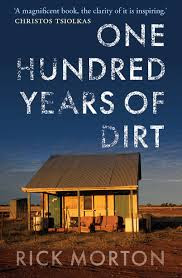 Morton grew up on his family's expansive cattle farm, Pandie Pandie Station, just south of Birdsville in outback Queensland. Life on the land was harsh and the Morton family suffered terribly in their isolation. Rick's father Rodney was a violent man who grew up in fear of his own brutish father; this violence was handed down through generations.

When Rick was just a boy, his brother was badly wounded in a terrible fire. The Royal Flying Doctors were called in and his brother, mother and newborn sister were whisked away to the burns unit at a Brisbane hospital. Rick stayed behind with his father and nanny, trying to make sense of events. Fast forward several years and Rick's mother is hovering on the poverty line trying to raise her three children single handed. Rick's brother falls into trouble with drugs, causing problems for the family. Rick has his own scars to bear, and the author is open about his struggles to find his way in the world, dealing with his feelings of isolation and loneliness.

In many ways this memoir reminded me of JD Vance's Hillbilly Elegy (2016) in its meditations on poverty and its call for more equality between rich and poor. Morton litters his book with many facts about drug addition, the lack of a social safety net and the absence of political will to tackle these burning issues. Sometimes these references to journal articles and other external sources are jarring and take you away from the narrative. But other times they are well integrated and show Morton's skills as a reporter. He is keenly critical too of the media's lack of willingness to cover stories related to poverty.

Ultimately this memoir is a story of love for the author's mother Deb, who sacrificed so much to give Rick and his siblings a better life. As I read I thought a lot about my own mother and the many sacrifices she made for my brother and me throughout our lives. Maternal love and sacrifice is a debt that can never be repaid, but in One Hundred Years of Dirt Morton has shown the heroism of his mother and his unending love for her.
Posted by Ina Guddle at 06:00
Newer Post Older Post Home