Today the Shortlist was announced for the 2018 Man Booker prize, consisting of: 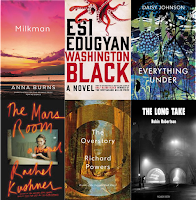 So Nick Drnaso's graphic novel Sabrina has fallen off the list, as has Michael Ondaatje's Warlight which I though would have been a shoo-in.

Here's what the judges had to say about the shortlist.