On Loss and Loneliness

It has been sometime since I last read a graphic novel, but when the Man Booker longlist was announced and included Nick Drnaso's Sabrina (2018) I jumped at the chance to become reacquainted with the genre. 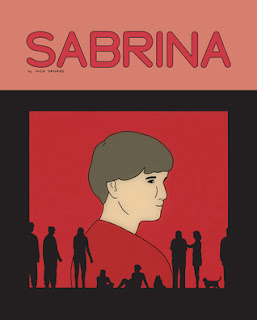 The story is simple, but loaded with complex contemporary themes. When Sabrina goes missing, her boyfriend Teddy is unable to cope. He goes to stay with his friend Calvin, shuts himself into a spare room and withdraws from the world. Meanwhile shock-jocks and social media are screeching conspiracy theories and Teddy is spiralling downward into anxiety and depression.

Calvin is also struggling as he is missing his ex-wife and daughter who have moved interstate. He wants to have a better relationship with them but he doesn't know how. He spends most of his life working shifts in a nondescript military base watching screens. When he returns home he tries to connect with Teddy, who remains despondent.

The world Nick Drnaso portrays is bleak and uninviting. People live in isolation, unable to meaningfully connect. It is a damning critique of the 24-hour news cycle, fake news, and click-bait. A meditation on modern loneliness, where we are surrounded by people but unable to connect. 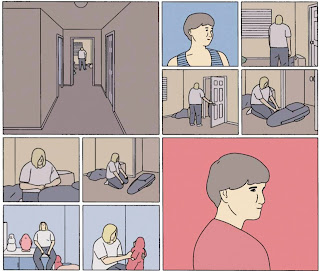 Using a limited colour palate, and many panels without dialogue, Drnaso creates a lonely world. The style reminded me of Chris Ware and his Jimmy Corrigan: The Smartest Kid on Earth (2000).

Mundane daily routines are beautifully rendered. Tension builds as the stakes get higher, and I found myself engrossed in what Calvin and Teddy were seperately going through. Despite the melancholy subject matter, I really enjoyed this novel.

I did have some troubles with it. For example, at times I found it difficult to distinguish the characters as some looked similar to others - indeed all the military guys looked identical. While Sabrina is the title character, you don't get much of a sense of her. The abrupt ending left me wanting more.

Sabrina is a beautiful book to behold. The large hardcover is a weighty tome of over 200 pages. As you flick through the pages, you are drawn in and enjoy the physical act of turning each page. This is a book meant to be read in hardcopy, an e-reader would not do it justice.

It will be interesting to see if Sabrina stays on the Booker radar and makes the shortlist. Regardless, I am glad to have had the introduction to this book, and will definitely track down Drnaso's other work.
Posted by Ina Guddle at 18:40
Newer Post Older Post Home