Australian journalist Chris Hammer's debut novel Scrublands (2018) is a gripping page-turner that had me in its' spell from beginning to end. Despite the novel's length (almost 500 pages), this is a complex thriller with plenty of twists and turns to keep readers engaged. 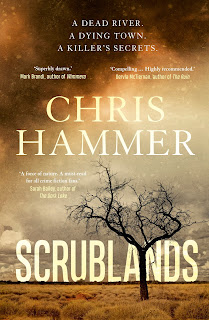 Riversend is a small, dying town in the drought-stricken Riverina. On a hot summer's day the town's beloved priest commits an uncharacteristic act of violence, shooting and killing five parishioners. A media swarm followed and then quickly moved on, leaving the locals to come to terms with what happened.

Journalist Martin Scarsden has spent much of his career in war zones as a foreign correspondent. He has returned home after a trauma in Gaza, and is trying to put his life and career back together. His editor sends him to Riversend to write a story on the town and its people for the first anniversary after the killings.

Scarsden checks into the aptly named Black Dog Motel and sets about exploring this ghost town, where shopfronts are boarded up or open irregularly. As Scarsden begins to speak to the locals and dig into the events of a year ago, he discovers that previous reports of the incident were not entirely accurate and there is a much bigger story here. The pace quickens as more reporters come to town and Scarsden finds himself in the spotlight and having to face his own demons.

This is a suspense novel with many layers. Hammer's writing is descriptive and evocative, accurately depicting the dust and heat of the scrublands. He writes believably about the landscape and its inhabitants, creating some uniquely memorable characters. The plot line of competing media interests caused me to think of Sonia Voumard's The Media and the Massacre, and the ethics of covering violent crimes.

Scrublands has already been optioned for television and will be produced by Ian Collie, who brought Peter Temple's Jack Irish series to the screen. So that will be something to look forward to.

I am loving the current wave of Australian crime novels and I am intrigued with so many being set in rural areas, like Emily Maguire's An Isolated Incident, Jane Harper's The Dry, and now, Scrublands.